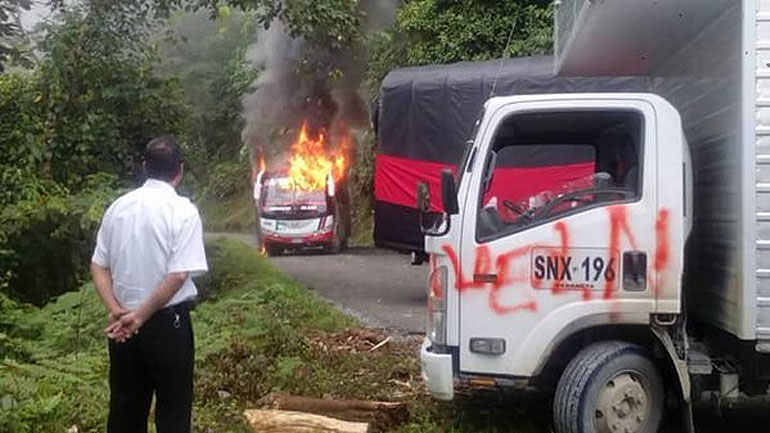 Rebels belonging to Colombia’s second largest rebel group, the ELN, have reportedly carried out several attacks to enforce a 72-hour economic shutdown in the country. One policeman was killed, several were injured and one bus was burned.

The attacks took place in several parts of the country where the rebel group is active.

The most violent outburst took place in Ocaña, a rebel stronghold in northeast Colombia, and cost the life of one policeman while injuring two civilians and one more officer.

According to local newspaper La Opinion, four alleged ELN rebels drove by a restaurant and opened fire at the policemen having lunch, injuring civilians who were also in the restaurant.

Areas where the ELN has considerable influence

A second attack took place in the Tibu municipality where guerrillas attacked a rural police post. This attack left only material damage, the newspaper from Cucuta reported.

In the western Choco department, another guerrilla stronghold, ELN guerrillas burned down a bus traveling from Medellin, the capital of the populous Antioquia province to Quibdo, the capital of Choco.

In the capital Bogota, a fragmentation grenade went off and in the northeastern town of Arauquita, numerous ELN graffiti and banners appeared.

In total, reported Bogota newspaper El Tiempo, the guerrillas carried out seven acts of violence in the first 24 hours of what they call an “armed strike.”

The guerrillas’ shutdown prohibits all commercial activity, including public transport.

While the group does not have the territorial control or manpower to effectively impose an armed strike in Colombia’s entire national territory, the recent attacks make clear that the ELN is serious about violently enforcing the shutdown in areas where they do have strong presence.

Additionally, the attack in Choco made clear that President Juan Manuel Santos‘ claim that “the armed forces are entirely prepared for this so-called armed strike,” were just words.

Colombians remember vividly how in the 1990s guerrilla groups like the FARC and ELN controlled vast parts of the country’s road infrastructure, including entry and exit points to urban centers. This increases the rebels’ ability to coerce the public to obey its orders.

Armed groups like the ELN, the FARC and the Urabeños have previously ordered regional shutdowns, severely disturbing public order and using public fear for retaliation to maximize their impact on public life and their apparent military might.

The ELN has been engaged in preliminary peace talks with the Santos administration, but these talks allegedly have been on hold since December. According to the guerrillas, this is because the government is stalling the process. According to others, the rebels have imposed conditions in regards to Colombia’s economic model that are unacceptable for the government.

The FARC, which was able to formalize talks with the government in 2012, applied the same violent tactic in periods that peace talks were stalling.