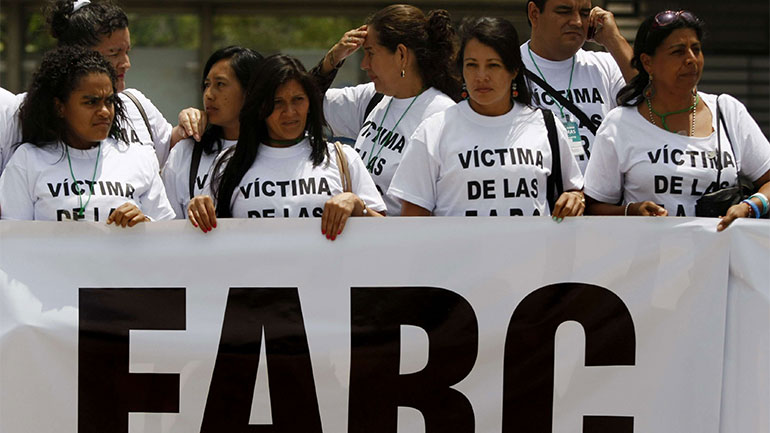 Colombia’s prosecution seeks to charge some 1,500 civilians with conflict-related crimes allegedly committed by guerrilla groups like the FARC, which is currently negotiating peace with the government.

The civilians are all suspected of having either ordered or taken part in crimes like homicide, kidnapping, extortion and forced displacement carried out by a row of leftist guerrilla groups during Colombia’s more than 50-year-long armed conflict.

In total, the transitional justice tribunal that will be put in place if peace is reached between the FARC and the administration of President Juan Manuel Santos will prosecute tens of thousands of people allegedly involved in war crimes or crimes related to the conflict.

The country’s reintegration agency said last year it expected some 20,000 FARC guerrillas and logistical supporters to demobilize. All demobilizing rebels and rebel collaborators will have to appear before the tribunal, initially to check if they can request amnesty or are accused of war crimes.

Local media have since reported that the number of demobilizing FARC fighters and FARC support network members could rise to 40,000, more than the approximately 30,000 who demobilized with right-wing paramilitary groups AUC between 2003 and 2006.

Additionally, the vice-Prosecutor General earlier announced that some 24,400 state officials would also have to appear before the transitional justice tribunal in the event of peace with the country’s largest and longest-living rebel group.

The new batch of pending indictments is possibly only the beginning of the indictment of civilians as it comprises charges filed before regional prosecution offices from just five of Colombia’s 32 departments.

Additionally, the accused civilians were incriminated by guerrillas who have either been captured or deserted before and during the peace talks, including prominent commanders like “Karina” and “Martin Sombra.”

This means that the list could expand once guerrillas and guerrilla commander still active in the FARC begin confessing crimes.

The list does also not include civilians who allegedly conspired with state agents or paramilitary groups to commit crimes.

The tens of thousands of guerrillas, members of the military, politicians and civilians implicated in war crimes or conflict-related crimes will have to appear before a Peace Tribunal, a temporary court that will seek justice for the more than 7 million victims of the armed conflict, at least 260,000 of whom were killed.